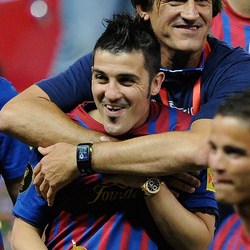 Reports are out claiming that PSG have been told to forget about Barcelona striker David Villa.

It is said that the French giants made an enquiry for the Spain international over the weekend, but received short shrift from Barca officials.

The Spanish internatioal striker expects to be fully fit for the start of preseason training under new coach Tito Vilanova.