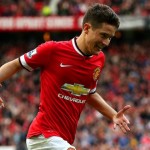 It has been reported that Barcelona are reportedly showing plenty of interest in Manchester United’s Ander Herrera.

Sunday People suggests that the Catalan giants are keen on midfielder Herrera who has adjusted to English football nicely in the second half of the current campaign.

It is believed that Barcelona will make a play for the 25-year old when their transfer embargo is lifted by FIFA in January 2016.

Herrera joined United from Athletic Bilbao in the summer of 2013 and has emerged as one of Louis van Gaal’s best players during the 2015 section of this Premier League season.