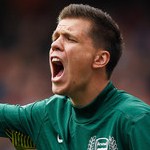 El Mundo Deportivo revealed that the Spanish and European champions want to buy a young keeper to act as understudy to Victor Valdes.

Szczesny is on their shortlist, though the favourite is Lanus youngster Esteban Andrada, 20.

Theo Walcott Hails The Impact Of Scott Parker For England