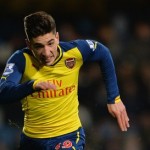 Reports are out claiming that Barcelona are seeking to re-sign Arsenal fullback Hector Bellerin.

The People reported that Bellerin has been added to a list of right-backs that Barca are tracking.

The club are on the lookout for Dani Alves’ long-term successor – the Brazilian turns 32 this week and is out of contract this summer – and a move to take Bellerin back to the Nou Camp will be considered.

Bellerin, the speediest player at the Gunners, moved to the Emirates from Barcelona four years ago at just 16 after spending eight years in the Nou Camp academy.