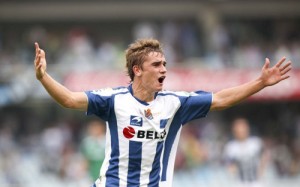 Antoine Griezmann has attracted attention from the likes of Tottenham and Arsenal but now he has also caught the eye of Barcelona.

The French winger has starred for a Sociedad side that is currently sitting fourth in La Liga, with Griezmann particularly impressing this season.

And according to Spanish sports paper AS, Barca are looking to pip the North London clubs to sign the 22-year-old in the summer transfer window.

However, Arsenal manager Arsene Wenger is thought to be keen on bringing his compatriot to the Emirates, having first made enquiries for him when Real were in the Spanish second division.

Tottenham boss Andre Villas-Boas is also an admirer of Greizmann, who is rumoured to have a transfer release clause of around £25m.

Guardiola : I Never Doubted My Team!