According to reports from The Sun, Barcelona stars Andres Iniesta and Gerard Pique asked Arsenal youngster Hector Bellerin about his “personal situation”. 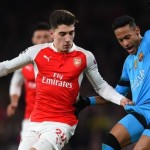 Iniesta and Pique had approached Bellerin to congratulate him on his performance following Barcelona’s 2-0 first leg Champions League encounter against Arsenal and now according to reports, it has been claimed that the duo actually spoke to the youngster with an intention to tempt him to the Nou Camp.

Iniesta and Pique along with the likes of Lionel Messi, Xavi and Carles Puyol were involved in luring Cesc Fabregas from Arsenal to Barcelona back in 2011 and it is believed that they are looking to do the same with Bellerin who left the Catalan club’s La Masia academy to join the Gunners in that same year.

Arsene Wenger Ready To Bring Patrick Vieira Back To Arsenal