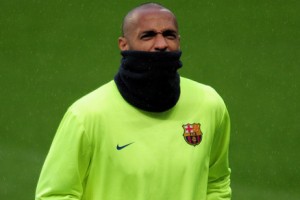 Barcelona striker Thierry Henry is one step closer to making the move to the USA to sign a deal with MLS.

The France international star is set to leave Spanish club Barcelona after again being left out of the squad and reports suggest that the Catalan giants will allow him to leave 12 months before his contract expires.

A move to MLS looks extremely likely now with New York Red Bull and DC United emerging as the front runners although the Red Bulls seem to hold the key.

New York are confident they can sign Henry as a Designated Player and team him up with captain Juan Pablo Angel to form a formidable force up forward.