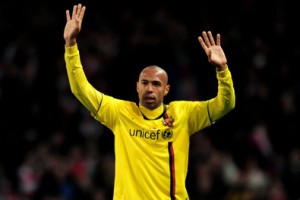 Barcelona striker Thierry Henry has praised the fans of his former club Arsenal after the two teams met in the Champions League on Wednesday night.

The London club were two goals to the poor during the quarter-final first leg clash but rallied to force a 2-2 draw and Henry said it had a lot to do with the great Arsenal fans who he knows very well from his successful time at the club.

The Frenchman told reporters that : “I was not surprised by what the Arsenal team did, not with these fans. I’ve said it so many times that it always helps,”

He also said that : “They can be 2-0 down at home and if your fans start to boo you then it’s a different story but the Arsenal fans were helping them, trying to make them come back in the game.”

“On the other side, it would have been better to come back with a win but it’s still a good result for us. But I’m not surprised at all because I know what can happen here.

“There was a lot of emotion for me Obviously coming on, you heard what happened. The special moment happened at the end.

“Like we always do as a team at Barcelona, we went to say thank you to our fans and the Arsenal fans… I would like to thank them for the welcome back. What happened after that, I never imagined.

“I have great love for the club and I think the fans – you saw them – still love me. It was amazing.”

No Way I Was Joining Manchester City! – Neymar