Reports are out claiming that Barcelona coach Luis Enrique hailed his players after their amazing 6-1 win over PSG. 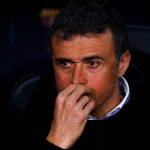 Enrique insists he always believed they could pull off the historic Champions League shock.

At the final whistle he said: “The deployment of the team was spectacular. We take risks.

“Many things happened. The key was faith in the team, when in 84 minutes we were eliminated, we threw everything, even the goalkeeper went up to shoot. Then, the sixth goal was scored for all the world.

“This is a competition that does not forgive a bad match. We turned around and in the quarters we hope to compete. We have to learn from mistakes. It was worth suffering even after the defeat of Paris.”

Daniel Alves : Barcelona Will Not Give Up On Title!