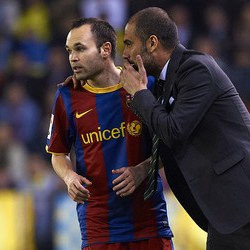 Reports are out claiming that Barcelona will appeal UEFA’s proposal to ban Andres Iniesta for one Champions League match for deliberately collecting a yellow card.

The World Cup winning midfielder was cautioned in the first leg of Barca’s quarter-final against Shakhtar Donetsk, which the Spanish club won 5-1, for not retreating the required distance at a freekick, meaning he missed the return game in Ukraine.

UEFA officials at the match alleged the 26 year old provoked the card so he could serve the standard one-match ban in the second leg and would have a clean slate for the semi-finals.

Barcelona face La Liga rivals Real Madrid in the last four of Europe’s premier club competition with the first leg away at the Bernabeu on April 27.

“FC Barcelona believe that the arguments outlined in their appeal, based on the good faith of the player and the disproportionate nature of the proposed sanction will be sufficient to rebut these allegations,” the club said on their website (www.fcbarcelona.cat).

“The UEFA disciplinary committee will make a decision on the case on Wednesday,” they added.