It has been reported that Manchester United risk missing out on Ajax utility Daley Blind. 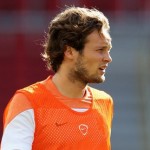 El Mundo Deportivo reported that Louis van Gaal and Luis Enrique, the two new managers of United and Barca respectively, are battling for the 24-year-old’s signature.

The Dutch international is reported to be in Barcelona today.

Ajax manager Frank de Boer, though, hopes to keep Blind, but admits every player has his price.

“Personally, I don’t think so,” when asked by AT5 if Blind would be sold.

“Everyone is obviously for sale, but we feel that those three players, the World Cup players (Blind, Jasper Cillessen and Joel Veltman), with a few guys in the current squad, should be the water carriers of this squad.”