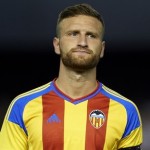 The Spanish giants will be allowed to return to the transfer market in January after this summer’s ban and a new centre-half is on Fernandez’s agenda.

The defender has also been linked with Real Madrid in recent weeks.