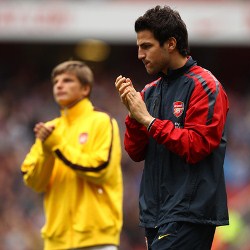 It has been revealed that Arsenal have rejected a £27 million bid from Barcelona for Cesc Fabregas.

The Arsenal captain this week revealed his admiration for the Catalan club, and their manager Pep Guardiola. However this latest development in the ongoing saga over the midfielder’s future could spell the end of further speculation.

Barcelona president Sando Rosell has recently declared that Barca will not spend more than £35 million on the Spanish international due to the 24-year-old’s recurring hamstring injuries.

Rosell said recently: “If last year we offered 40 million Euros [£35.5 million], it is clear that this year his value is less. Since then there has been wear and tear and he is worth less.

“Guardiola knows the values of players and Cesc’s is less than 40 million Euros. Barcelona will offer less and, if they don’t accept, then he won’t come.”

It is understood the most recent offer was made verbally by Barca’s vice president Josep Maria Bartomeu during his visit to London this week, but was rejected immediately by Gunners chief executive Ivan Gazidis.

Barcelona are expected to make one final play to snare Fabregas, however with both clubs evidently differing on their value of the player, it appears the stand-off may be a permanent one.