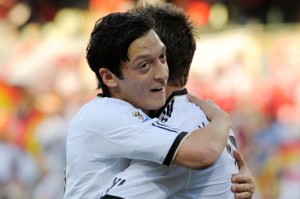 It is said that Ozil attracted the interest of FC Barcelona by manner in which he tore apart England’s defence yesterday.

According to Sport, Barcelona flop Alex Hleb could be key in negotiations for Ozil.

It is believed that former Arsenal star Hleb is a favourite of Werder management and they would welcome him as a cut-price replacement for Ozil.

However it is said that Werder Bremen will only do business if Barcelona are prepared to cough up big on the cash side of the deal.

Barcelona To Use Money From Cadena COPE To Sign Cesc Fabregas