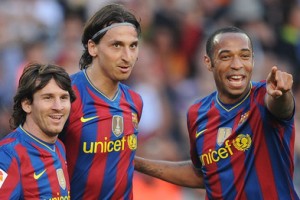 Barcelona are weighing up offering Zlatan Ibrahimovic to Arsenal in exchange for Cesc Fabregas.

It is reported that Arsenal boss Arsene Wenger would soften his stance over keeping Cesc if Ibrahimovic was offered in part exchange.

Despite the arrival of Marouane Chamakh from Bordeaux, Wenger would still welcome the chance to sign the Swede – who actually came close to joining the Gunners as a teenager.

Barca want a deal for Cesc before the World Cup, which will mean Ibra being offered to the Gunners in the coming weeks.