It has been reported that Barcelona coach Luis Enrique is tightlipped on their pursuit of Fiorentina wing-back Juan Cuadrado. 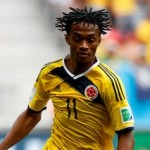 The Colombia international star has been linked with Barca and Manchester United this week.

Speaking after their friendly defeat to AS Roma, Enrique said: “Cuadrado? I’ll only talk about my players.”

Enrique, however, did say of Roma: “They will do well in Europe.”