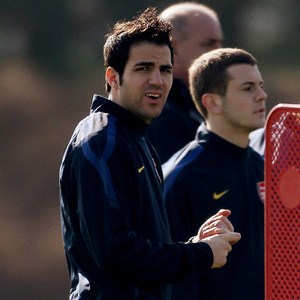 It has been revealed that Spanish champions FC Barcelona are ready to sell in order to fund a bid for Arsenal captain Cesc Fabregas.

The Mirror has reported that the Catalan giants insist privately they are undecided on whether to pursue another crack at signing the Arsenal captain this summer.

However coach Pep Guardiola, president Sandro Rosell and sporting director Andoni Zubizarreta are due to meet to discuss whether to renew their interest.

Barcelona have a frosty relationship with Arsenal and Arsene Wenger will try and resist any attempts by the Spanish club to sign Fabregas who is under contract until 2005.

But Barcelona are ready to clear the decks by selling off Alexander Hleb (currently on loan at Birmingham), full back Maxwell and Seydou Keita.

That would free up funds to make a big money move and Guardiola is massively in favour of signing Fabregas.