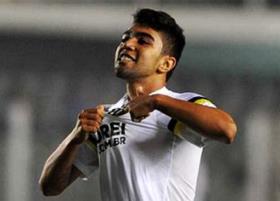 It has been reported that Santos whizkid Gabriel Barbosa has admitted that his future is tied to Barcelona.

Recent reports suggest the the Spanish champions have first refusal on the 17 year old forward as part of the Neymar deal.

The Brazil U17 international said : “Someday I hope to become a Barca player. I’ve dreamed of this since I was little, from the moment I started playing football. The Spanish have already shown interest in signing me.

“I’ve always followed with admiration Neymar, my idol. He gave me a lot of help in my first few months here in Santos, before moving to Spain.”