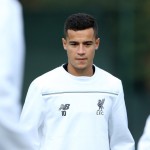 Barca chief Robert Fernandez played down he rumours this week.

But Lima told Esports COPA: “It would be an error to give up on [signing] Coutinho, not just for FC Barcelona, but for any of Europe’s big clubs.

“Coutinho has the right profile for Barça. Technically, he can play on either wing.”

He added: “He’s a box of surprises. He’s really grateful [for all he has in his life]. Maybe in the middle in a game of high tension he would suffer, though. He would be better on the wing.”