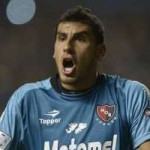 It has been reported that Barcelona coach Tata Martino has recommended Newell’s Old Boys goalkeeper Nahuel Ignacio Guzman to the club’s front office.

The reigning Spanish champions still need to find a long-term replacement for Victor Valdes, who will leave next summer when he comes off contract.

El Mundo Deportivo revealed that Martino has urged Barca chiefs to consider Guzman, who he worked with at Newell’s last season.

6 ft 3in Argentine goalkeeper only played in international level for the Argentine U20.