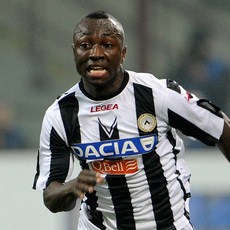 Transfer news from the Spanish League are out and it has been reported that Barcelona are prepared to move for Udinese fullback Pablo Armero.

It is said that the Spanish giants have Armero under consideration as an alternative to No1 fullback target Jordi Alba, of Valencia.

According to Sport, Barca president Sandro Rosell refuses to pay over the odds for Alba and instead is willing to explore the prospect of bringing Armero to Spain should Valencia not lower their asking price.