It has been revealed that Barcelona winger Gerard Deulofeu is edging closer to signing permanently with Everton. 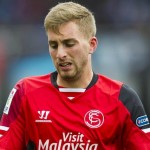 Everton are poised to finalise a £2.2million deal for Deulofeu after he arrived on Merseyside on Monday, says the Daily Mail.

The 21-year-old spent a successful loan spell at Goodison Park in 2013-14 and was keen to return to Roberto Martinez’s Toffees – insisting on a permanent rather than temporary move.

Deulofeu spent last season on loan with La Liga side Sevilla, although his chances were limited to 15 starts with his last appearance coming as a 28-minute substitute on April 26.