Lionel Messi has signed a two-year contract extension with Barcelona, tieing him to the Catalan club until 30 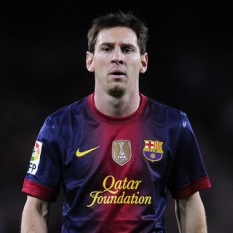 The 25-year-old came through the youth ranks at Barcelona before making his competitive debut against Espanyol in 2004 at the age of 17.

He won his fourth straight Fifa World Player of the Year award following a remarkable 2012 in which he scored 91 goals, smashing the record of 85 in a calendar year set by the Bayern Munich and West Germany striker Gerd Müller in 1972.

However Messi admits Barcelona won’t be his last club.

Messi would like to play out his career in Argentina.

“I have said it before, in Europe I’d like to end my career at Barca,” he told the FCBarcelona.com.

“I wouldn’t consider moving to another European club. With that said, I’m not ruling out the possibility of ending my playing career in Argentina.”