Reports are out claiming that Barcelona whizkid Sergi Samper has appeared to give Arsenal the green light for a transfer after indicating that he is considering the move. 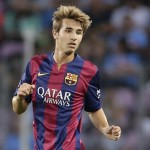 The 20-year-old is yet to break into the Barcelona first team but Arsene Wenger sees him as an ideal addition to the Gunners midfield.

Barcelona-based newspaper Mundo Deportivo reported the story with the headline: ‘Wenger attacks again’, claiming that Samper is keen to play regular football after becoming disillusioned at the Nou Camp.

Wenger previously tried to sign Samper in 2011 as part of the same deal that brought Hector Bellerin to the Emirates and despite the Spaniard having a contract until 2017, Wenger believes that now is the time to strike.

The Gunners will have to outdo Portuguese giants FC Porto who are also interested in Samper and are rumoured to have already entered into negotiations with the Catalan club.