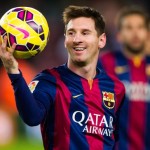 Lionel Messi is unimpressed being singled out for drug testing by UEFA.

The Barcelona star was one of five players to undergo the testing before their Champions League tie with PSG.

However, what upset the Argentine international is unlike the other four, he was the only one needing to provide two samples.

He posted on social media: “Day of doping. Of the 5 chosen I was the one who did urine and blood. Bizarre, no ….?”