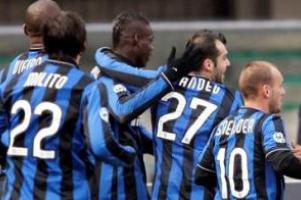 Goran Pandev helped Internazionale recover from two goals down to draw 2-2 at Bari in another remarkable display of resilience by the Serie A leaders.

Jose Mourinho’s side, who won 4-3 against Siena last weekend having looked beaten, went behind to two Paulo Barreto penalties in the second half but stormed back despite missing several injured first team players.

Former Lazio striker Pandev kept his cool to net his first Inter goal and then won a spot kick which Diego Milito converted to increase their lead over next weekend’s opponents AC Milan to nine points.