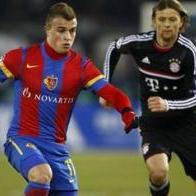 Valentin Stocker came off the bench to notch the only goal of an entertaining and open contest in Switzerland four minutes from time.

The hosts had hit the woodwork twice in the opening stages, but also had goalkeeper Yann Sommer to thank for a string of excellent saves to keep Bayern’s highly-rated firepower at bay.

After defeating Manchester United to get to the knockout stage of the Champions League for the first time, the Swiss champions claimed another scalp in the form of the 2001 European champions though they will need to avoid defeat – or at least score an away goal – to advance to the quarter-finals.