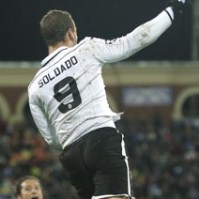 The Spain striker opened the scoring from the penalty spot just before half-time and struck twice more in the second half to sink surprise package BATE Borisov.

The two teams were joined on six points by Bayern Munich at the midway stage of the group. BATE had stunningly won their first two games in the group, against Lille and Bayern, but were quickly on the back foot.