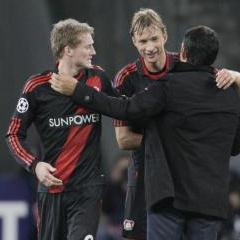 Bayer Leverkusen scored twice in the space of five second-half minutes to come from behind and claim a victory that tightened their grip on second place behind Chelsea in Champions League Group E.

Andre Schurrle cancelled out Jonas’ first-half opener in the 52nd minute and four minutes, later Sidney Sam got the goal that would decide the match in Leverkusen’s favour.

It left Valencia ruing their failure to make more of a first half that was essentially one-way traffic, with the Spaniards pouring forward to create chances at will.

The Son Of Branislav Ivanovic Shows Off His Skills – Video