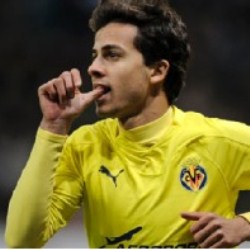 Substitute Nilmar scored twice, including a last-minute winner, to help Villarreal take a significant step towards the quarter-finals of the Europa League with an away victory over Bayer Leverkusen tonight.

Bundesliga high-flyers Leverkusen, unbeaten in 10 Europa League games this season, took the lead through a fine strike from Michal Kadlec but Villarreal drew level before the break through Giuseppe Rossi.

The Yellow Submarine then got themselves in front thanks to Nilmar, who netted just a minute after coming on in the 69th minute for Rossi, but that lead was short-lived before the hosts equalised through Gonzalo Castro.

That looked to be the way the game would finish, but Nilmar had other ideas and he broke through four minutes into stoppage time to prod in what could prove to be a crucial strike ahead of next week’s second leg at El Madrigal.