It has been reported that Bayer Leverkusen are desperate not to lose Liverpool target Emre Can. 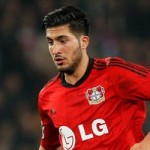 Liverpool are tracking the 20 year old midfielder, although it is not believed a bid for the Germany Under-21 midfielder is imminent.

And the club’s squad manager Michael Reschke says Leverkusen want him to remain for at least another season.

“We will do everything we can to keep Emre,” he said.

“Because we are convinced that another year would be right for his sporting development with us.”