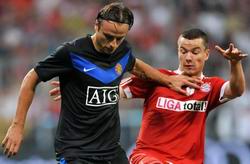 Manchester United suffered a 7-6 penalty shoot-out defeat to hosts Bayern Munich after a goalless final of the Audi Cup.

Bayern held their nerve in front of a sell-out crowd of 69,000 at their Allianz Arena after United strikers Wayne Rooney and Michael Owen missed great chances in the second half to win the match.

Bayern enjoyed the better of the first half, in which Mario Gomez and Dimitar Berbatov both hit the woodwork, but United then had the better opportunities after the interval – only for Rooney and Owen to fail to beat Bayern goalkeeper Michael Rensing in one-on-one situations.

Rensing proved to be Bayern’s hero as he made saves from Patrice Evra and Jonny Evans in the shoot-out before Daniel van Buyten stroked in the winner.