Bayern Munich and Arsenal drew 1-1 in their Champions League last 16 second leg at the Allianz Arena, but the German side progressed to the quarter-finals 3-1 on aggregate. 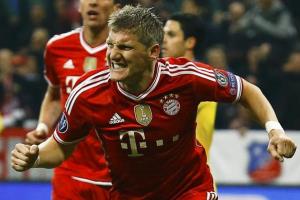 Pep Guardiola’s Champions League holders were in control of the tie after a 2-0 win at the Emirates Stadium three weeks ago, and more or less put matters to bed when Bastian Schweinsteiger accepted a pass from Franck Ribery to lift the ball over Lukasz Fabianski in the visiting goal from eight yards out on 54 minutes.

Arsenal rescued a draw on the night three minutes later when Lukas Podolski latched onto a ball from Olivier Giroud before smashing a powerful drive past Manuel Neuer, who was beaten at his near post by the energy of the shot. Podolski appeared to push Philipp Lahm in the back to earn possession, but the goal was allowed to stand much to the annoyance of the home side.

Arjen Robben’s diving was an unsporting feature of the match, and he earned a soft penalty when he dived after being barely nudged on the heels by Laurent Koscielny a minute into four added on.

It was perhaps justice that Fabianski saved home substitute Thomas Mueller’s penalty with his feet after diving to his right. Arsenal escaped with a draw, but the damage was more or less done three weeks ago when the German side enjoyed a 2-0 win in London.

Alex Oxlade-Chamberlain Confident Arsenal Can Be Title Challengers This Season