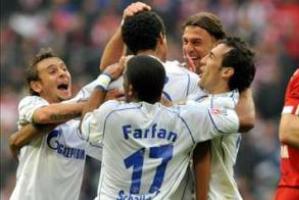 Bayern grabbed the lead on 31 minutes when defender Holger Badstuber sent a free kick into the box and Daniel van Buyten was at hand to tap in after Schalke’s Kevin Kuranyi accidentally headed the ball into the Belgian’s path.

The balance was restored just before the break when Lukas Schmitz floated a free kick into the box and Matip, until recently in Schalke’s U19 team, rose above Bayern defenders to head home.