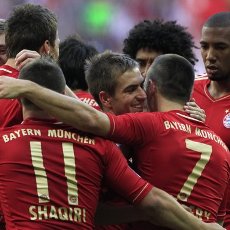 Bayern Munich made it seven wins out of seven, equalling their own Bundesliga record for consecutive victories at the start of a season, thanks to a routine success over Hoffenheim today.

Franck Ribery scored both goals for the Bavarians, who are now just one win away from breaking a record they share with Mainz and Kaiserslautern.

The Frenchman struck first in the 19th minute and then sealed the win in the 47th as Bayern bounced back from their only defeat in all competitions, at BATE Borisov in the Champions League in midweek.