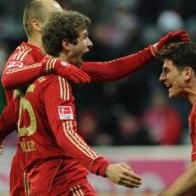 10-man Bayern Munich opened a six-point advantage at the top of the Bundesliga, a 3-0 win over Cologne ensuring they would go into the winter break as leaders.

Franck Ribery was sent off in the first half but Bundesliga top scorer Mario Gomez notched his 16th league goal of the season to put the hosts in front after 48 minutes.

Substitute David Alaba made it 2-0 from close range and Toni Kroos grabbed the third goal two minutes from time with a delicate chip from 10 metres.

Bayern have 37 points from 17 games. Second-placed Borussia Dortmund, the champions, are on 31 and visit bottom club Freiburg on Saturday.

Did Fernando Torres Criticise His Own Team-Mates? – Interview Video