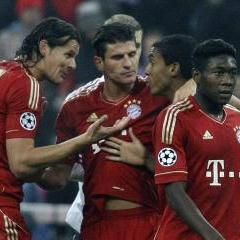 Bayern Munich survived a nervous second half to take a significant step towards the Champions League knockout phase with a 3-2 victory at home to Napoli.

The Bavarians led 3-0 through Mario Gomez’s first-half hat-trick. However, Federico Fernandez reduced the home side’s lead with his goal before the break and when he scored a second in the 79th minute it sparked a tense finish among the home support as they held on for the win after both sides had a man sent off in the latter stages.

Bayern coach Jupp Heynckes admitted this week he has started to dream about winning the competition at the Allianz Arena next May and knew a win would take them one step closer to the goal of contesting the final at their home ground, but more importantly it would put them in control of their own destiny in Group A.

The win did not guarantee Bayern a place in the last 16 but gives them the chance of sealing their passage in their next home game against Villarreal.