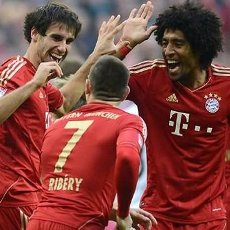 Striker Mario Gomez was on target in his first league appearance since surgery in August as Bundesliga leaders Bayern Munich crushed Hanover 96 5-0 and extended their advantage at the top to nine points.

Superb first-half goals from Javi Martinez and Toni Kroos and another from Frenchman Franck Ribery gave the hosts a 3-0 lead at the break.

Defender Dante headed in another on the hour and Gomez slipped past one defender to slot in seconds after coming on for his first league appearance this season after missing the first three months recovering from an ankle operation.

The show of force lifted Bayern to 34 points from 13 games with champions Borussia Dortmund, their opponents in seven days time, leapfrogging into second place nine points behind with a 2-1 win at Mainz 05 – their third straight win in the league.