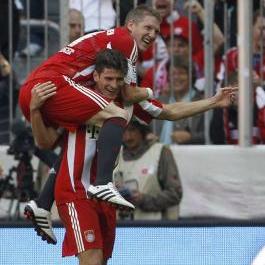 Mario Gomez netted a first-half hat-trick as he guided Bayern Munich to a crushing victory at home to Bayer Leverkusen in their first match since the sacking of coach Louis van Gaal.

Simon Rolfes scored an own goal to put Bayern on the board after seven minutes, before Gomez struck in the 28th and 44th minutes and one minute into first half stoppage time for a 4-0 half-time lead.

Eren Derdiyok pulled a goal back for Leverkusen after 62, minutes before Franck Ribery made it 5-1 with 15 minutes left.

Bayern, who have not lost at home to Leverkusen since October 1989, reclaimed third place in the Bundesliga with 55 points – one point ahead of Hannover and six points behind Leverkusen.

Leverkusen, who had gone eight games without a loss and allowed just one goal in their last five games, could have trimmed the margin behind leaders Dortmund to two points and put the leaders under enormous pressure to beat Freiburg later today.