Bayern Munich routed Werder Bremen 6-1 on Saturday to maintain its march to the German title and help Jupp Heynckes celebrate his 1,000th Bundesliga game as player or coach.

The 67-year-old Heynckes, who will be replaced by Pep Guardiola next season and has signalled his intention to retire, was presented with a bouquet before kickoff in Munich to mark his achievement. Only Otto Rehhagel, with 1,037 games, has more.

“We want to keep our rhythm, to continue on our way and not let ourselves be sidetracked by premature praise,” Heynckes said. “Our premise is to play better and more successfully,”

Heynckes made six changes to the side that won 3-1 at Arsenal in the Champions League on Tuesday, giving Arjen Robben and Mario Gomez rare starts.

Robben seized his chance by scoring in the 25th and sending in a free kick for Javi Martinez to double the lead with a header four minutes later.

Bayern’s task was made easier before the break when Sebastian Proedl was sent off for bringing down Gomez when the striker was through on goal. 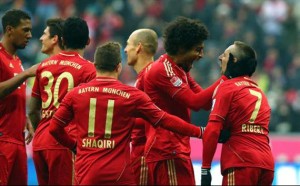 Fellow Bremen defender Theodor Gebre Selassie scored an own goal in the 49th as he attempted to clear Gomez’s cross from the lurking Franck Ribery.

Gomez made it 4-0 three minutes later, before Kevin de Bruyne scored for Bremen in the 58th — the first goal Bayern has conceded this year in the league, and only the eighth this season.

Ribery made it 5-1 with a volley thanks to Philipp Lahm’s ball over the defence in the 86th, and Gomez completed the rout in the 89th, after Robben’s second assist of the afternoon.

“We’ve had to accept a hammering here,” said Bremen coach Thomas Schaaf, after his 750th game.

Bayern moved provisionally 18 points clear of Borussia Dortmund ahead of the defending champion’s visit to Borussia Moenchengladbach on Sunday. The sides meet in an eagerly anticipated German Cup quarterfinal in Munich on Wednesday.