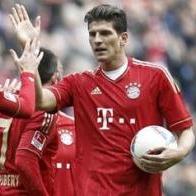 A hat-trick by Mario Gomez and two goals from Arjen Robben inspired Bayern Munich to a 7-1 rout of Hoffenheim on Saturday while leaders Borussia Dortmund were held 0-0 at lowly Augsburg.

Bayern’s emphatic victory boosted their confidence ahead of the Champions League round of 16 second leg against Basel in midweek and gave them 51 points from 25 games.

Gomez gave Bayern a fifth-minute lead when he pounced on a weak clearance by keeper Tom Starke, opening the floodgates as the hosts looked to bounce back from last week’s defeat by Bayer Leverkusen.

Bayern scored four more times in the first half through Gomez, a goal and a penalty from Dutchman Robben and Toni Kroos as Hoffenheim kept losing possession deep in their own territory.

Bundesliga top scorer Gomez notched his third goal of the game with a header at the far post in the 48th minute to take his league tally to 21 goals this season.

Franck Ribery made it 7-0 following a quick break before former Hoffenheim player Luiz Gustavo put through his own net with five minutes to go.