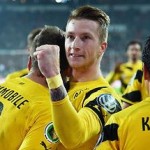 Reus can leave the Westphalians for a set fee, reported by Bayern to be €25million, and Rummenigge has already stated his club’s interest.

“We know what quality he has and we also know what clause he has,” Rummenigge said to Sport1< /i>.

“A young, Germany international with such quality is probably interesting for us, but I don’t want to cause any ill-feeling with Dortmund.”

Reus has also been linked with Arsenal, Manchester United and Manchester City.