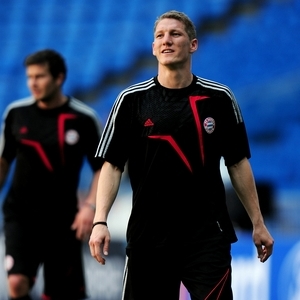 Bayern Munich star Bastian Schweinsteiger’s contract is nearing its end and club chief Uli Hoeness has revealed his intent on keeping hold of the German star.

It is said that Schweinsteiger’s contract expires in 2012 and clubs are already lining up ready to take him away for a cut-price fee next summer should he not sign a new deal with the Bavarians.

However is is believed that Hoeness has told Schweinsteiger to name his price for a new contract.

“Bastian certainly knows what he has got here,” he told LIGA total television.

“It is not like he is going to have to sign up for benefits. If our guys need more money from the board, then they will get it.

“We will not be tight because we know exactly how important he is for us.”

Hoeness also warned interested clubs to keep their hands off because they will not be able to compete.

“The guys from Real (Madrid) tried it with Franck Ribery and all they got was a bloody nose,” he said. “Everybody in Europe has got to start learning what they are up against with FC Bayern, and that it is not so easy (to sign our players).”

Schweinsteiger has openly courted interest from Manchester United and Chelsea this week.

He laughed: “Maybe they can swap me for Rooney.”

Schweinsteiger also expressed his appreciation of Chelsea’s approach, adding: “I watch the English games on TV and I like the Chelsea style at the moment. They’re very strong.

“For me, in England the fans are better,” he added. “When the team give their best, they are not booing.

“It’s more like they are fans more with the heart.”