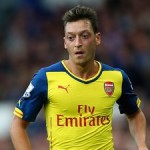 The Daily Express reported that the Gunners are willing to sell Ozil in January, with Bayern Munich the frontrunners for his signature.

It is thought Bayern are lining up a £30million bid, even though the Gunners paid £42.5m to take Ozil from Real Madrid.

Ozil has scored just once in the Premier League this term.