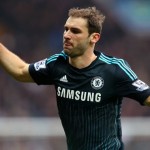 Reports are out claiming that Bayern Munich are eyeing Chelsea defender Branislav Ivanovic.

The Daily Star Sunday reported that Bayern coach Pep Guardiola is ready to offload Brazilian Dante and has put Ivanovic, 31, on his list of replacements.

Ivanovic has 16 months left on his contract and has yet to be offered new terms despite Chelsea boss Jose Mourinho saying he wants him to stay.

Mourinho likes Ivanovic because of his attitude and abrasive style and often holds him up as an example for Chelsea’s youngsters.