Reports have emerged claiming that Bayern Munich are preparing a bid for Chelsea ace Willian. 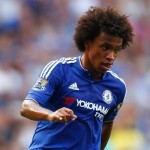 The Sun reported that the German giants are weighing up a move for Willian, although Chelsea are looking to keep hold of the midfielder with a new contract offer.

The 27-year-old has been a bright spark in a poor start to the season for the Blues, with Jose Mourinho’s side sitting in 16th place after seven defeats in 12 games.

Willian joined Chelsea from Anzhi Makhachkala in 2013 for £30m, and has played 107 games for the club, scoring 13 goals.

Bayern are planning to test Chelsea’s resolve particularly if they fail to secure Willian to a new deal.