It has been reported that Bayern Munich’s sale of Bastian Schweinsteiger to Manchester United has created a dilemma for the merchandise department. 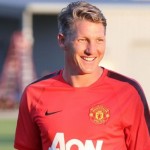 Many fans had bought Bayern’s new shirt with Schweinsteiger’s No31 on the back – which is now obsolete following his move to United.

Hans Pflügler, Bayern’s merchandise rep, told Kicker: “I believe that almost everyone who has bought our new jersey with Schweinsteiger, wants to keep this also.

“Basti, for the fans even after leaving, is a high priority. It is their jersey and now also a keepsake.”

However, he added: “If some are unhappy, we will talk to them to find a solution.”