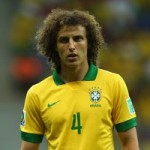 Transfer news from the German Bundesliga is out claiming that Bayern Munich is ready to launch a £34.5million for Chelsea defender David Luiz.

It is said that new Bayern boss Pep Guardiola has reportedly asked for permission to go after the 26-year old Brazilian international.

It is believed that the former Benfica star is content at Chelsea but European champions Bayern will look to test the resolve of the Blues even though manager Jose Mourinho is a massive fan.

Luiz is known for his versatility and can play in defence as a centre back as well in midfield.