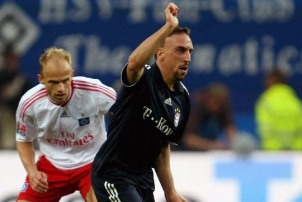 Interesting news are out an it has been reported that Bayern Munich have offered French international winger Franck Ribery to Spanish giants FC Barcelona and Real Madrid.

German media has reported that the Frenchman’s slide and Bayern’s current dismal form has led the German giants to begin hawking Ribery around Europe.

It is believed that FC Barcelona, Real Madrid and Manchester City are among the clubs to have been made aware of Ribery’s availability for €35 million.

Franck Ribery has managed only seven first team appearances for Bayern this season as he struggles to cope with a nagging knee injury.