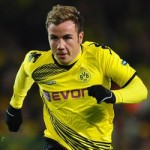 The attacking midfielder’s release clause in his contract has been activated, according to his agent Volker Struth and his club, and he will join the German champions on 1 July. The fee is reportedly set at €37m (£31.5m).

Dortmund’s Facebook page confirmed the news early on Tuesday, although the club stressed at the time that they had yet to hear anything official from the newly-crowned Bundesliga champions.

The statement read: “Mario Götze’s agent Volker Struth told us a few days ago that the player wishes to make use of his release clause and on July 1, 2013 move to Bayern Munich.”

Hans-Joachim Watzke, Borussia Dortmund’s CEO, also stated: “We are obviously disappointed beyond measure, but emphasise that both Mario and his advisers have behaved within the terms of the contract. From Bayern Munich there has been nothing official on this matter up to this date.”

Shortly afterwards Bayern did make an official announcment, in a statement on their official website which read: “Bayern Munich confirm that the club have reached an agreement with national team player Mario Götze that he will play for Bayern Munich from 1 July 2013.

“Bayern are prepared to meet the release clause agreed between Borussia Dortmund and Mario Götze.”